Linguini with Bolognese Sauce â€“ Did someone say bacon? 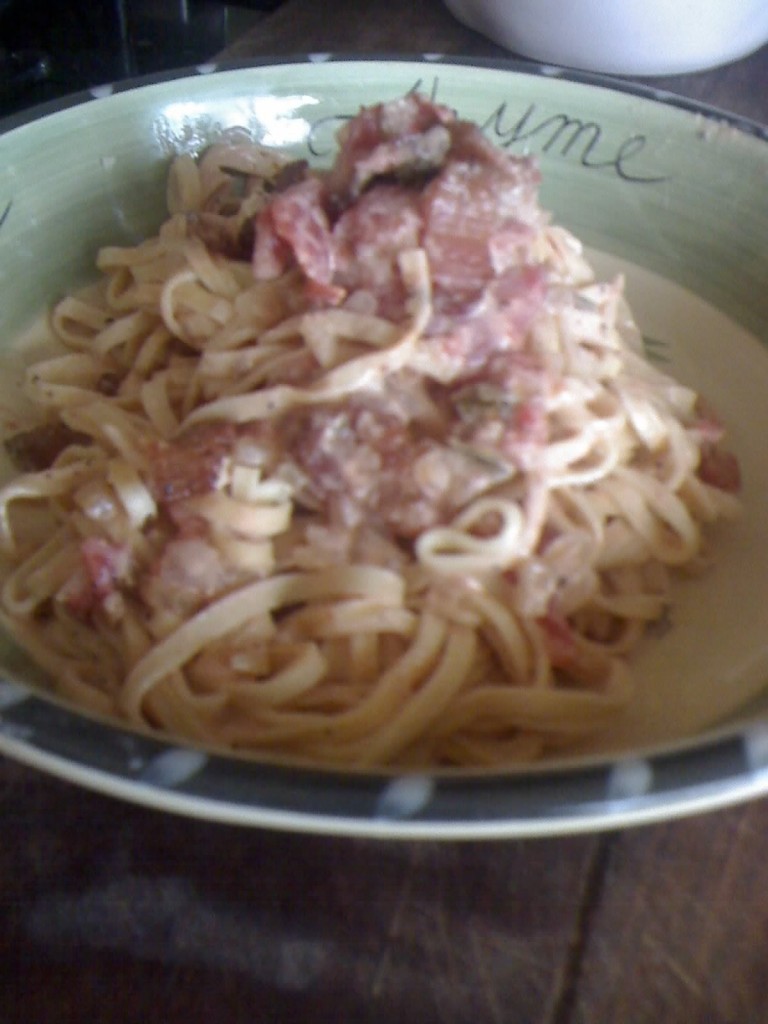 Did someone say bacon?

Since you’ve decided to have pasta, put on a pot of water add some salt and let is start to boil.

From the refrigerator, I found:

2 cans stewed tomatoes or substitute the tomatoes you have.

Start heating the frying pan and add the bacon. Let’s get this meal on the table.Â  As the bacon crisps, put a small dice on one onion.Â  Once you have set aside the bacon and have it draining on a paper towel, remove all but 1 tablespoon of bacon fat from the pan. Add the onions and let them sweat.

Run to the pantry and figure out what type of canned tomatoes you have available. I had stewed tomatoes that were preseasoned with oregano.Â Â  When the onions are tender, add the tomatoes and sauce from both cans.Â  Add a splash of cooking sherry and bring to a simmer.Â  Your water should be boiling. Add the pasta.

Add 1/2 cup to 3/4 cup of cream to the tomato mixtureÂ and turn the burner down to low.

As soon as the linguini is al dente, strain and add to the tomatoe mixture. Stir and allow the linguini soak up all the goodness.

Add a nice mound to the center of the plate, sprinkle the crisp bacon on top.Â  Serve to the hungry crowd.

As my son would say, “Did someone say bacon?”Â  Hmmm irresistable.

This entry was posted in Italian Restaurant and tagged bacon, fast, linguini, pasta. Bookmark the permalink.